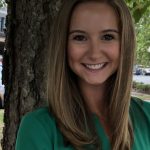 LCSWA, is a Licensed Clinical Social Work Associate.  Ally is a Virginia native and grew up in Raleigh, North Carolina.  She completed her Masters of Social Work at the University of North Carolina at Chapel Hill.  At the University of Georgia, she earned her bachelor’s degree in social work, with a minor in Human Development.  While earning her BSW, Ally interned as a school social worker for the local school district’s elementary schools.  In this role, she supported children and families of children with behavior and mood disorders.

As a master’s student at UNC-CH,  Ally worked at a large non-profit in Raleigh, providing child psychosocial assessments and developmental screenings.  In her role, Ally educated families on the impact of trauma on early childhood development and social emotional functioning, and helped facilitate parenting workshops in shelters and treatment facilities.

Ally has special interests in a variety of behavioral compliance issues, anxiety, depression, adjustment concerns and families impacted and shaped by adoption.  Ally strongly believes in the importance of forming warm, supportive therapeutic relationships with children, adolescents, and parents.  She is passionate about working collaboratively with families, providing evidence-based treatment, and emphasizing individual and family strengths.

Ally is a member of the National Association of Social Workers.